From an eco-road trip with Casey Affleck to a once-in-a-lifetime journey aboard the Venice Simplon-Orient-Express to a wellness cruise with Gwyneth Paltrow, these are luxury travel transportation experiences you should be dreaming about this winter.

When Gwyneth Paltrow decides to host a cruise party, you know it’s probably going to involve green juice over champagne, but no matter — it’s epic all the same. Such was the case in September, when Celebrity Beyond launched its inaugural goop at Sea Experience through Spain, the Italian Riviera, and France. The goop cruise hosted workshops, movement sessions, pop-up wellness activities, and a live, in-person conversation with Queen G herself.

So what was the experience like? Unmissable, of course! Guests dined at Le Voyage by Daniel Boulud, Global Culinary Ambassador Daniel Boulud’s first restaurant at sea;the dining experience Blu for AquaClass guests, with menus featuring clean, crisp flavors and inventive cuisine complemented by an extensive list of sustainable, biodynamic wines;the Spa and Fitness Center, including at-sea fitness programs such as F45 classes and Peloton cycling, 120 rejuvenating and destination-inspired treatments, and the SEA Thermal Suite, with eight distinct spaces to navigate a personalized path to wellness; the Solarium, an adults-only glass-dome-covered pool area; the Aqua Sky Suite, a beautifully appointed suite with a spacious veranda and spa-inspired elements thoughtfully infused throughout, including eco-friendly bath products, yoga mats, and eXhale bedding; a special detox smoothie; and on-demand wellness programming from the likes of Katie Brauer, founder of the Yoga Professional, Noella Gabriel, co-founder and Global President of Elemis, Kimberly Snyder, founder of Solluna, and Ruth Zukerman, co-founder of SoulCycle and FlyWheel Sports.

Alas, while the goop cruise has sailed, the same itinerary can be enjoyed by guests in 2023 aboard Celebrity Reflection, which has offerings that Gwyneth’s did not. These include Michael’s Club for Retreat guests (expect complimentary beverages, gourmet bites, and a comfortable place to unwind, as well as a dedicated concierge who’ll make any arrangements you need — on board or off); special suites with cantilevered showers; a lawn club with eight exclusive, cabana-style retreats, including The Alcoves; the intimate, Hamptons-style casual dining venue, The Porch; The Art Studio, for aspiring artists interested in hands-on classes, some culinary-themed; the open-air, interactive Lawn Club Grill; and special smoothies at the on-site spa café. Goop or no goop, your journey will be epic — we promise.

Photo Credit: Etihad AirwaysEtihad Airways just unveiled its gorgeous new Airbus A350-1000 on a special inaugural commercial flight from Abu Dhabi to Paris, which is indicative of what’s to come from the most premium of commercial airlines. The aircraft features a Rolls-Royce Trent XWB engine, which provides 25 percent less fuel burn and CO2 emissions than previous-generation twin aisle aircraft, as well a calming new cabin interior inspired by the shadows cast by Abu Dhabi’s palm trees. The atmosphere emulates natural, ambient light and is designed to provide an optimum environment for sleeping, which, in turn, is meant to reduce the effects of jet lag. The elevated Business Class is home to 44 Business Studios with sliding doors that provide a high level of privacy to each suite. Noise-cancelling headphones and an 18.5” TV screen provide an almost cinematic experience, while the seats themselves cleverly feature built-in wireless charging docks and Bluetooth headphone pairing, as well as Acqua di Parma toiletry kits. There’s also a “dine any time” meal service, with fare made to order and dinner specially served on white linen tablecloths and real china. Travelers need to note that there are currently no Etihad Airways Residences — the most expensive seat in the sky at $64,000 a ticket — currently operating anywhere in the world. But the good news is that its Etihad Stopover Program still exists, giving travelers the option of staying overnight in Abu Dhabi during their layover, choosing from several experiences that suit upscale travelers:the Jetsetters option, which includes a five-star hotel in the island city at a 40 percent discount, or Transit Connect, where guests on eligible routes can book a complimentary hotel near Abu Dhabi International Airport if their flight connection time is between 10 and 24 hours — a wonderful way to be able to see local landmarks like the Louvre Abu Dhabi, the stunning architecture and ornate designs of Qasr Al Watan and the Sheikh Zayed Grand Mosque, as well as the theme park attractions at Yas Island.

Turkish Airlines has long been one of the world’s most elite commercial carriers, but now the airline has a lofty goal: to make its hub, the state-of-the-art Istanbul airport, the world’s largest international travel destination, with an eventual capacity of 200 million passengers — an imminent goal, given that it’s centrally located between the continents of Europe, Asia, and Africa, flying to more countries and international destinations than any other airline in the world (including 17 gateway cities in North America). The experience starts at IGA’s gorgeous new lounge (staffed by stylish employees wearing couture, courtesy of Milan-based haute couturier Ettore Bilotta), which is chock-full of exquisite culinary offerings, including Turkish delight and baklava, as well as a roving masseuse for good measure. Meanwhile, the flight experience itself is supreme, given that Dreamliners are the jewels in the crown of Turkish Airlines’ young and fast-growing fleet of 388 planes, with each Dreamliner featuring the carrier’s bespoke, all-new Business Class cabins​. With lighting that draws inspiration from the colorful sunsets of Turkey’s dreamy Cappadocia region and idyllic turquoise beaches of Bodrum; enhanced privacy panels; self-care mirrors; wide cocktail tables; 180-degree full-flat, 76-inch seat beds; suede-like Alcantara padding (commonly found in sports cars); a snack bar; a dedicated in-flight chef; noise canceling headphones; flow sleeping sets; upscale Coccinelle and Hackett amenity kits; Turkish coffee and Turkish delight service; and even lavatories with live plants, it’s a truly enjoyable upscale experience.

Talk about once in a lifetime! On June 5th, Veuve Clicquot invited guests to celebrate its 250th anniversary by curating a two-night journey that led guests from all over the world to their crayères in Champagne, France, aboard the Venice Simplon-Orient-Express, a Belmond Train, and finally to Cipriani, A Belmond Hotel, in Venice, Italy.

The journey began in Reims, where sojourners were treated to a privileged peek inside the crayères of Veuve Clicquot champagnes. Didier Mariotti, the 11th Cellar Master since the foundation of the house in 1772, led the elite crew through a tasting of cuvées — including Brut Carte Jaune, La Grande Dame 2012, Vintage 2002, Cave Privée 1989, and Cave Privée 1995 — which was paired with an sensorial experience and sea-specific menu by chef Philippe Mille of the restaurant Le Parc, in a setting designed by Charles Kaisin that was reminiscent of one of Harry Potter’s Great Hall feasts.

Once on board later that day, passengers checked into their cabins — the best of which were six distinctly different grand suites that embody the ambiance of the cities they were named for (Paris, Vienna, Prague, Budapest, Istanbul, and, of course, Venice) — before enjoying aperitifs and an exquisite dinner prepared by celebrity chef Jean Imbert of Plaza Athénée and Dior Paris. In keeping with the theme of the experience — Solaire Culture — guests rose to see the sunrise in Austria.

Upon arrival in Venice, train guests were transferred to Cipriani, a Belmond Hotel, on Giudecca for a magical night’s stay, with an evening involving Carnival masks, a sunset spectacle with traditional Italian aperitivos, and a dinner of epicurean delights courtesy of Michelin starred Italian chef Ricardo Canella, as well as a slew of dazzling cuvées, of course.

While the this trip cannot be repeated, all experiences can be booked separately, from private tours at the Veuve Clicquot cellars, to a journey aboard the Venice Simplon-Orient-Express, to a splendid stay at the Cipriani, a Belmond Hotel. 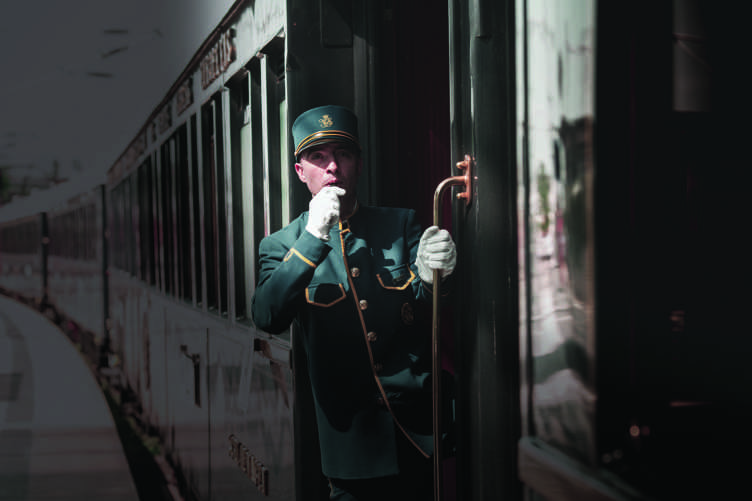 For the automobile part of our feature, see our inaugural celebrity road trip with Oscar winner Casey Affleck HERE

Subscribe to discover the best kept secrets in your city