Metal corrosion is far more than merely a persistent nuisance in a modern world held together largely by the strength of its most basic and widely used materials.

The decay process is commonly triggered by chemical reactions to which metals are exposed under various environmental conditions. The damage it does to metal alloys can result in serious threats to industrial facilities, transportation, civil infrastructure, national defense, public safety and other critical structures, systems and services. Corroded materials have led to major problems requiring expensive repairs and replacement of technology used in manufacturing operations, oil and gas pipelines and chemical plants, as well as public utilities.

Such destruction on a large scale can destabilize major segments of national economies. Currently, it’s estimated that the accumulated effects of metals corrosion cost the U.S. economy hundreds of billions of dollars every year.

So it’s more than a small step forward that mechanical engineering and materials science research at Arizona State University by Kiran Solanki and Vikrant Kumar Beura, along with Kristopher Darling from the DEVCOM Army Research Lab, has produced a new surface treatment for metal alloys that enhances corrosion resistance against a variety of environmental factors.

Solanki is a professor in the School for Engineering of Matter, Transport and Energy, part of the Ira A. Futon Schools of Engineering at ASU. His research focuses on a combination of materials science and solid mechanics. Beura recently earned a doctoral degree in materials science from the Fulton Schools and is now working at Intel as a packaging research and development engineer.

Solanki developed the initial idea for the research with Darling, who he has collaborated with for several years. Beura, who Solanki advised during his doctoral studies, carried out materials processing and experimental studies, including characterization, corrosion measurements and spectroscopy measurements.

Transmission electron microscopy experiments for the research were performed by Yashaswini Karanth, a materials science and engineering doctoral student and graduate research assistant in  Solanki’s lab. 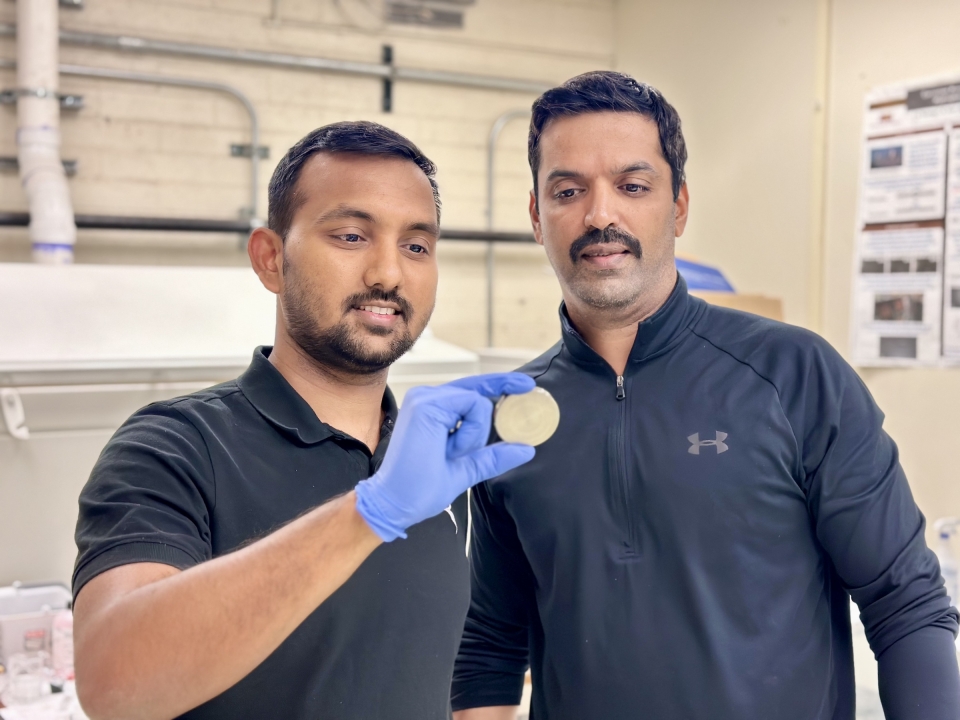 Ira A. Fulton Schools of Engineering Professor Kiran Solanki and recent Fulton Schools doctoral graduate Vikrant Beura teamed up to conduct materials and mechanical engineering research and develop a new treatment for metal alloys. The surface treatment promises to strengthen these important metals against the environmental conditions and other factors that cause them to corrode. Photo courtesy Kiran Solanki

Ramping up robustness of metal alloys

In their paper published earlier this year in the research journal npj Materials Degradation, the researchers detail the intricacies of metal alloys corrosion and their search for ways to make alloys more corrosion resistant.

“We have designed a treatment to both enhance the performance of alloys and give them a longer life span,” Solanki says. “Our patent-pending process changes the surface morphology of metallic alloys in ways that enable them to perform better in aggressive environments.”

Equally as important, the treatment improves corrosion resistance without a loss of the alloys’ overall strength. That has been a particular drawback of previous trial-and-error processing techniques, Solanki says. The treatment also works especially well on aluminum-based alloys used in the aerospace, automotive and naval industries.

The research project is based in a deep understanding of morphology, which in materials science and engineering involves the close study of the microstructure of materials — in this case, metal alloys. The microstructure features of materials used for many of these alloys determine the form, size, shape and basic overall architecture of the metal objects and structures built with them. These microstructures dictate the alloys’ physical and chemical properties.

“We’ve learned to change the morphology of the surface of a metal alloy by either changing the internal microstructure or by adding different alloy elements,” Solanki says. “So, when we do these treatments, we can coat the surface with different kinds of alloying elements.”

Solanki and Beura’s treatment alters the internal microstructure and oxide layers of alloys, making their surfaces more resistant to the kinds of gasses, liquids, salts, acids and varying temperatures that can corrode metallic materials.

This technique may be the first of its kind capable of significantly boosting the resilience of metal alloys, but the researchers already see possibilities of further advances.

“There are a combination of other factors we are exploring now that could improve the coating treatment and make alloy materials stronger,” Solanki says.

Solanki and Beura point out that there are alloys made of aluminum, zinc, copper, manganese, titanium, nickel, magnesium and other metallic materials. This means a variety of combinations of surface treatments will likely be needed to provide effective corrosion resistance for all of these different metals.

They emphasize that spacecraft, aircraft, ships and automobiles will each need specific combinations and applications of treatments to best protect them from wear and tear in the different environments and conditions in which they are used.

The first picture shows the failure of the landing gear of an aircraft due to stress corrosion cracking (SCC), in which the combined effect of corrosion and continuous application of cyclic load led to crack propagation. Such catastrophic events can be avoided by improving corrosion resistance and the hardness of the surface layer of these components. The subsequent figures show the schematic representation of the novel surface treatment method that Solanki’s team has developed and successfully implemented on a model high-strength aluminum alloy (i.e., AA7075) frequently used in aerospace applications. This treatment has induced a gradient nano-grained layer along forming metastable nanoscale phases that have, in combination, contributed toward improved corrosion resistance. More details on the work can be found in the team’s recently published manuscript. Illustration by Vikrant Kumar Beura

Solanki and Beura are confident their research will provide fundamental building blocks for devising new formulas and methods to develop treatments that can be adapted to a broader range of metallic surfaces.

One of the next steps they foresee is investigating the of possibilities of alloys development starting at the atomic structure level, which may reveal other new ways to provide protection against corrosive elements and environments.

Solanki, Beura and others have already begun looking at alloy development at the granular and nanometer scales as a viable method of producing new or improved surface treatments.

“There are different kinds of particles and precipitates that increase corrosion in alloys,” Solanki says. “The question is whether we can change the features of such particles and their corrosive effects by fragmenting them or dissolving them.”

Other scientists and engineers are also exploring the potential of altering the microstructures of various kinds of materials in ways that make them more corrosion resistant.

Beura explains that varying the chemical compositions of surface treatments and how they are applied and distributed on the surfaces could also have an impact on how effectively they can prevent corrosion.

The researchers also see a particular need for more awareness of corrosion resistance in metal alloys used in construction, especially bridges and in the infrastructure of buildings. They note, for instance, that corrosion in plumbing systems can leak toxic metals like lead and copper into drinking water.

Solanki and Beura are scheduled to present their research findings in March at TMS 2023, the annual meeting and exhibition of The Minerals, Metals & Materials Society in San Diego, California.