Even protests of Houston freeway projects need to keep moving, it seems.

About two dozen opponents of a $7 billion plan to rebuild Interstate 45 in downtown Houston north to the Sam Houston Tollway gathered in an EaDo intersection Thursday to decry the Texas Department of Transportation plan.

Ever-willing to follow the rules, protesters piled into the crosswalk at St. Emanuel and Polk — then evacuated when the light changed .

“Clear,” a spotter would yell. Sign-holding opponents would scatter to the sidewalk, wait for the signal to change direction again, and wade back into the street.

They stayed on the move for the 70 minutes they occupied — however briefly and repeatedly — the crosswalk. 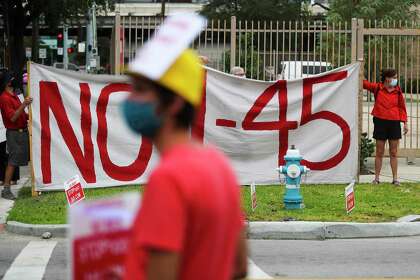 Houston police told the demonstrators they had to keep moving while in the intersection, so protesters did tight little circles in the crosswalk, chanting “say it loud, say it clear, there will be no expansion here” and “hey-hey, ho-ho, racist highways have to go.”

The protest, organized by members of Stop TxDOT I-45, is the first of many, said Molly Cook, who oversaw the Thursday morning “swarm.” Activists also are reaching out to public officials, she said.

PIERCE ELIMINATED: TxDOT’s $7 billion plan to shorten your I-45 commute may displace hundreds of families

Hundreds of homes and businesses, including many in EaDo near the protest location, will be lost to the freeway rebuilding around downtown and along I-45 and Interstate 10 from the central business district north. Along the way, some of the most affected communities include Third Ward, Fifth Ward, Near Northside and Independence Heights — all historically Black and Hispanic neighborhoods for the last half-century that have lost properties to previous freeway expansions. 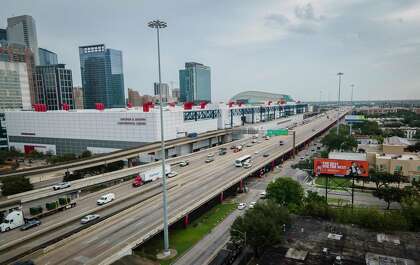 Proponents of the project note the freeway’s infrastructure such as overpasses and ramps are at the end of their useful life and modern safety standards require some of the redesign and property acquisition. Plans call for adding two non-tolled managed lanes in each direction — similar to the Katy Managed Lanes along I-10 — that encourage carpool and transit use.

FREEWAYS VERSUS FAIRNESS: Bolstered by racial debate, I-45 project critics call for change

City officials have made a number of design suggestions and requests for changes to TxDOT, but critics have said for months TxDOT has failed to address the concerns in a substantive way. State officials, meanwhile, have said they can be more responsive once they have design approvals, but cannot agree to some of the requests and improve traffic speeds along the freeway.

That is part of the problem critics have with the project, Cook told regional officials at a Houston-Galveston Area Council meeting last week.