Earlier this summer, the Prime Minister announced his £2billion plan to make cities more bicycle-friendly, and ‘give people the confidence to travel on two wheels’.

Boris Johnson’s dream seems very much alive in North London’s Finsbury Park, where colourful cyclists swish in and out of the gates, and into the 9am traffic, while small children whizz around in circles, shouting ‘Look, no hands!’ to their surprisingly relaxed parents.

I – at almost three times their age – feel less sure of my riding abilities, however. Louise Lee-Jones, who is patiently giving me my first-ever cycling lessons, is equally unimpressed.

As I lose control, for what feels like the 100th time, I panic. 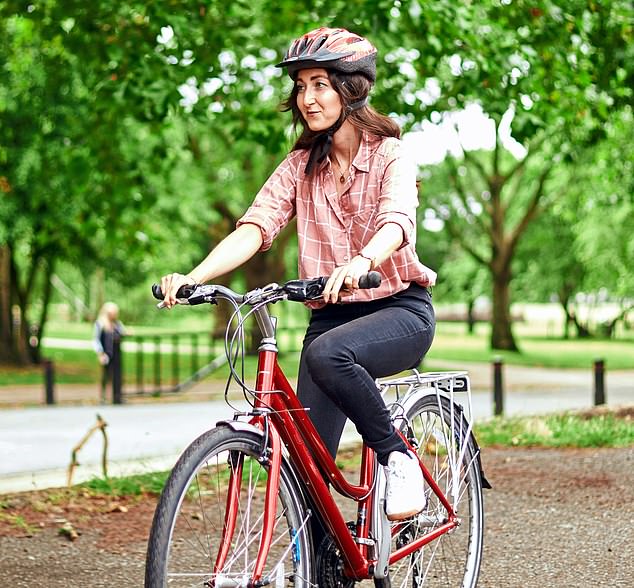 Neurologists have found that those who learn as a child store the skill in what’s known as ‘procedural memory’. Bike-riding is logged in brain areas responsible for recalling sequences of movement – for instance swimming or tying shoelaces (pictured, Eve Simmons cycling)

‘Use your brake…’ Louise begins to shout. But instead of squeezing the brakes, I slam both feet down on the tarmac, walloping my leg with the spinning pedals.

It hurts, a lot. I look over at the smiling ten-year-olds doing wheelies. At 28, maybe I’m just too old to learn?

When I told colleagues and friends I was planning to write about having cycling lessons, I got endless variations on the incredulous: ‘What do you mean you can’t ride a bicycle?’

As if everyone can. In fact, I’m among one in eight Britons who have never learned.

As part of the Government’s drive to reduce obesity rates and save commuters from catching Covid-19 on public transport, tens of thousands of adults are being offered free cycling training lessons.

While such a scheme has for years been available to children via the training charity Bikeability, as of this month grown-ups will benefit, too, with at least 12 local authorities offering the service.

The ‘cycling revolution’ also includes bike-repair vouchers, more cycle lanes and traffic reduction. GPs are even being recommended to ‘prescribe’ cycle training if they feel their patients are too sedentary and could benefit. 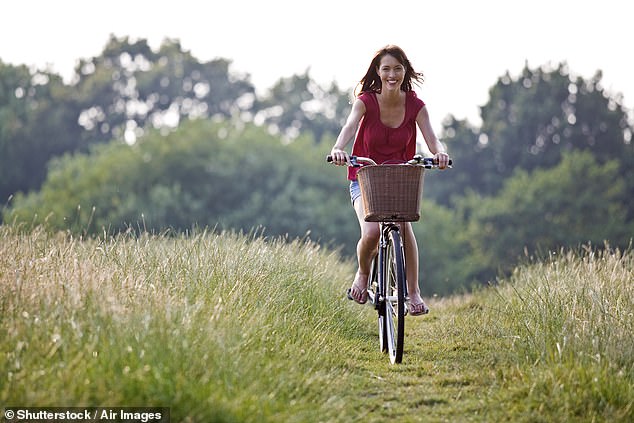 According to polls, the average Briton is taught to cycle as a child, but hasn’t ridden a bike for nine years. For most, jumping back on shouldn’t be a problem but for those who never learned, it’s a struggle  (stock) 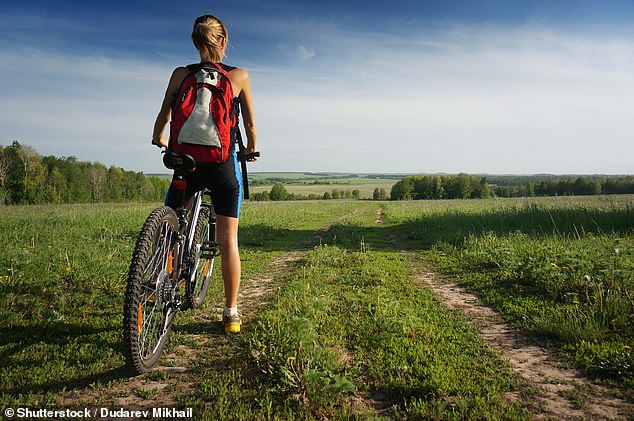 The ‘cycling revolution’ also includes bike-repair vouchers, more cycle lanes and traffic reduction. GPs are even being recommended to ‘prescribe’ cycle training if they feel their patients are too sedentary and could benefit (stock)

This is all well and good – but what if, like me, you find the thought of cycling terrifying?

An overwhelming fear of crashing has kept me well away from bicycles for my entire life – I never wanted to learn as child.

Learning last week that pop mogul Simon Cowell had broken his back following a cycling accident certainly didn’t help. Louise, who has been training beginners for seven years, tries to reassure me, saying: ‘Many people I train can’t even get on the bike in the first lesson – we simply walk it around to get familiar with it.’ 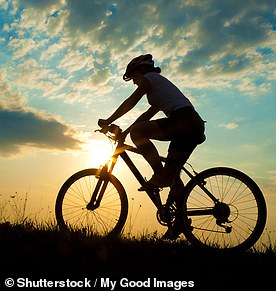 Adding increased weight to your back can throw your posture forwards, placing excess pressure on the sensitive tissues in the intimate area.

‘Try adding a basket to the front, or a frame,’ says Bianca Broadbent, a physio specialising in cycling.

‘Rucksacks are a common culprit for causing soreness down below.’

Saddle sores – in which the friction between the saddle and the skin causes blisters and burns – are the most frequent complaint of female cyclists, says Broadbent.

A common mistake is applying petroleum jelly, such as Vaseline, to the affected area. ‘The jelly won’t help to repair damaged skin,’ she says.

‘Use barrier creams that heal skin, such as Cavilon.’

TRY A SADDLE WITH A HOLE IN THE MIDDLE…

Some women may benefit from what’s known as a ‘forked saddle’, which is shaped to mimic the female anatomy.

A portion of the saddle is cut away, freeing the sensitive area from compression.

‘Those with a large amount of external tissue may find it particularly helpful,’ says Broadbent.

…AND POINT IT DOWNWARDS

‘Over time it digs into the skin, causing discomfort.’ Lee-Jones advises adjusting the saddle so its tip is angled slightly towards the floor.

For beginners, both Broadbent and Lee-Jones recommend what’s known as a hybrid bike.

These have a flat, high central bar and wider tyres, giving greater control over steering and improving posture.

Avoid light road bikes which are designed for racing.

Judging by these standards, I’m doing well. It didn’t take me long to master the art of keeping upright while turning the pedals a couple of times.

Going in a straight line I could do, almost immediately. But when asked to veer in any particular direction, my co-ordination went completely haywire.

‘Try to turn in the direction of the grass,’ instructs Louise, from a distance, as I push off. I find myself hurtling towards her for about 100 yards, petrified of what will happen if I dare to turn the handlebars ten degrees to the left.

I brake – using the actual brakes this time. This pattern continues two or three times, with me managing another ten or so yards with each attempt before I have to put my feet down.

‘Why can’t I go further?!’ I shout in exasperation. Since the pandemic struck, countless friends have embraced new cycle-to-work schemes and, more recently, have enjoyed countryside bike rides at the weekends.

My partner, Will, who until this year hadn’t cycled much since childhood, now averages six miles a day. So what is it that I’m finding so tricky?

The answer most likely lies with the old adage ‘you never forget how to ride a bike’, according to recent studies.

Neurologists have found that those who learn as a child store the skill in what’s known as ‘procedural memory’.

Bike-riding is logged in brain areas responsible for recalling sequences of movement – for instance swimming or tying shoelaces.

Procedural memories are the most steadfast of all long-term memories, as opposed to memories of events and experiences, known as declarative memories.

Studies show that new procedural memories are far harder to lay down with age, hence my brain block.

According to polls, the average Briton is taught to cycle as a child, but hasn’t ridden a bike for nine years. For most, jumping back on shouldn’t be a problem but for those, like me, who never learned, it’s a struggle.

However, I’m glad to reveal that it’s not impossible. Last week, during my second lesson – roughly two weeks after my first – came a breakthrough. After a couple of false starts, and Louise having to hold the back of the bike in case of emergency, I lapped an entire area of the park, unassisted.

My shoulders relaxed and I even allowed my feet to come off the pedals briefly, without shrieking in terror. It was something Louise said to me just before this that clinched it.

‘Let the bike go where it wants to go. You don’t have to cycle in a straight line.’ Next, we tried manoeuvring round in a circle again.

‘I don’t want you to think about turning at any given point,’ Louise said. ‘Just briefly think that at some point you might be heading in the vague direction of the grass, to your right.’

It worked. Gently squeezing the brakes for control, I managed a circle, albeit a very wide one. In all, I have been surprised how quickly I got the hang of it all. But there was also something else quite unexpected, that no one told me about.

While most modern bikes are supposedly unisex, most saddles are, I have discovered, not a woman’s friend.

‘Men can generally move all the soft tissue down there out of the way when they sit on a bike,’ says Bianca Broadbent, a physiotherapist specialising in cycling at Spire Healthcare.

‘But for women, the pressure is directly on the soft tissues of the intimate areas, making them vulnerable to blisters and sores. It’s even worse if you’re suffering from the menopause, or are pre-menopausal, because the tissues are already dry and at risk of breaking.’

Skin and urinary tract infections caused by cycling are also commonly reported – mostly in women. Some endurance riders end up needing surgery, such as British paralympian Hannah Dines, who developed a worrying lump while training for hours a day and trying to push through the discomfort.

Hers is an extreme example, but Broadbent is sure this is part of the reason relatively few women take up the hobby, or fail to persevere with it.

There are fewer than half as many female cyclists on the road as there are men, according to cycling charity Sustrans, and research by Transport for London found that only eight per cent of female Londoners travel by bike regularly. 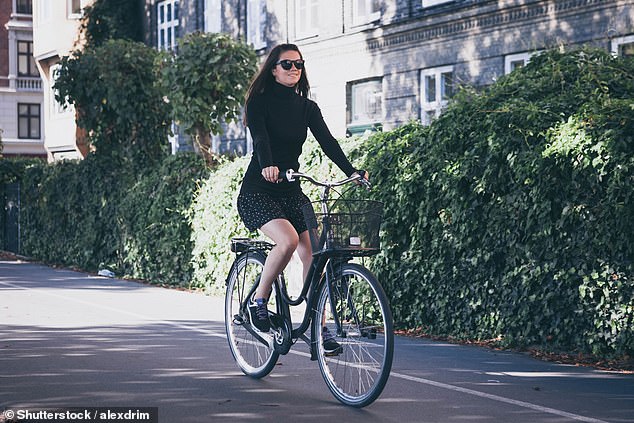 If you’re sitting upright and only cycling back and forth to work or the shops a few times a week, you shouldn’t need padded shorts to ward off discomfort, the experts say. And correcting your posture on the bike can alleviate any intimate sensitivity (stock)

Safety fears, body consciousness and getting flak from male cyclists are also factors, according to Sport England polls.

Bianca says: ‘Women often believe they have to wear specific clothes to cycle, such as Lycra, which puts them off using a bike to get to the office.

‘But this just isn’t true – most people can comfortably cycle in their regular clothes, even dresses.’

I must admit, I was surprised to see Louise sporting a pretty summer dress at one lesson. Then, depressingly, she told me that when she was on her way to meet me, a male cyclist hurled abuse at her for failing to wear ‘proper biking clothes’.

If you’re sitting upright and only cycling back and forth to work or the shops a few times a week, you shouldn’t need padded shorts to ward off discomfort, the experts say. And correcting your posture on the bike can alleviate any intimate sensitivity (the pros also use something called chamois cream).

Louise explains that because I’m nervous, I’m thrusting forward, increasing the pressure where I don’t want it, rather than where it should be – the sit bones below my buttocks. Having a bike that fits your frame will help, too.

On my first lesson I proudly bought along a high-tech bicycle that had been lent to me by a shop for this article – one sturdy enough to withstand rocky terrain and galeforce winds. I’d added a wicker basket to make it feel more ‘me’.

But I did not need such a robust bike to explore the suburbs of North London, Louise said. My feet couldn’t touch the ground – throwing my balance off.

Instead, I learned on Louise’s hybrid bike, which had flat handlebars and a lighter frame.

‘It’s important to visit a bike shop and try sitting on the models before you buy one,’ says Bianca. ‘Or visit a bike-fitter who will make basic adjustments according to your exact proportions.’

Back in the park, I hop off the bike and glance at the long stretch of tyre tracks behind me.

I call Will, extremely pleased with myself, telling him of my plans to buy a bike and practise at weekends. ‘I think we better get you a really good helmet,’ he replies.

He’s got a point.